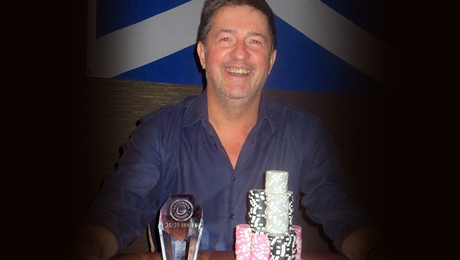 After lining up alongside 513 other entrants, 21-year-old Lodge managed to enter the final 16 on Sunday with the second largest chip stack, trailing only Richard Hawes in the standings.

And the two start-of-day chip leaders went on to meet heads-up in a thrilling battle for the title with the chip lead exchanging hands several times before Lodge began to put a cushion between himself and Hawes.

The final hand saw Hawes commit his stack with pocket jacks and Lodge call with a pair of fives. But Lodge spiked a set on the turn and when the river bricked, Hawes’ fantastic run came to an abrupt end.

The first player to fall on the final day was Matt Cartwright who shoved from the small blind with 7-5 and couldn’t get there versus the AD-QD of Leon Campbell.

Paul McTaggart was the final table’s first casualty, pushing all-in from the cut-off with pocket sixes and being called by Lodge in the big blind with Q-J. The KS-8D-3S-7S-8S on the board playing into Lodge’s hand, which contained a bigger spade than McTaggart.

Michael Lyons was the next to exit when he moved all-in with Q-10 but ran into Hawe’s pocket eights. The snowmen held on an ace-high board and the final table was down to four.

Four became three after a huge three-way pot including Lodge and Hawes sent Campbell to the rail and catapulted the economics student into the chip lead.

Lodge got out of the way, but Hawes called with pocket nines to put Devine at risk. Holding pocket 10s, Devine looked set for a double-up but a nine on the flop changed all that and when the board refused to straighten out or show a 10, Devine was gone.